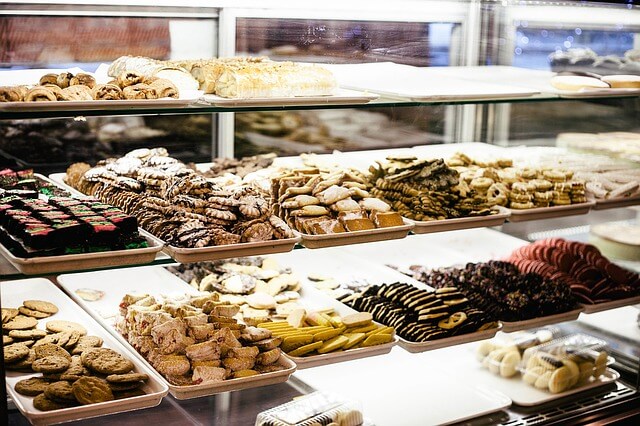 The Weird and Wonderful Customers at The mFortune Bakery

Since opening the doors to his bakery in the summer of 2016, our very own Paul Hollywood, Giuseppe, has been perfecting his pastries and crafting his cakes to deliver delectable delights to all and sundry at mFortune Casino HQ.

But it’s not just the staff that are queuing up to get a piece of the pie at the bakery. Giuseppe also has a number of regulars who can’t resist the scent of freshly baked deliciousness. And, we think you just might recognise some of them.

Mining for gold in the Midlands is a full-time – albeit pretty tough – job for our miner. After all, while there might be more canals here than in Venice, the rivers aren’t exactly awash with gold.

After a long and laborious day, a trip to Giuseppe is very much needed then. And top of his list? Millionaires Shortbread. Not only does it help him, in a loose way at least, live out his dreams of being millionaire, but it’s also choc-full of gold bits. Delish!

Our mariachi band are known for their love of Mexican food. Seriously, it’s all they ever taco about! But when they need something sweet to curb that chilli kick, they’re certainly glad they don’t have to hop over any borders to pick up a treat or two from Giuseppe!

Top of their list, is always Churros. This baked and fried treat is a Mexican classic and whether they come sprinkled with sugar or covered in chocolate, our moustachioed friends can’t get enough of these doughnut-like delights.

Looking after livestock is a full-time job, and it’s not often that gets time to himself. At least, that’s what he tells Mrs Macdonald. We often see him setting his watering can to automatic and sneaking off to the mFortune bakery.

Carrot cake is his favourite bake – maybe he tells himself it’s one of his five-a-day?! – and we’re pretty sure Giuseppe will trade off a cake for some milk and eggs to keep his pantry full. It sounds like a pretty sweet deal to us!

They’re not the first customers that would spring to mind, but our furry friends over at are partial to a treat from our Bake Me a Winner bakery. Even if it is a bit of a squeeze when they’re inside.

We’re not sure whether it’s the name or the combination of the hot and cold, but our winter woollys love a Baked Alaska. It’s not the easiest thing to eat with a trunk mind, it sure does help them get through the Ice Age.

Maybe it’s because he’s Italian, but our Giuseppe isn’t exactly what you’d call modest. In fact, he’s always telling anyone who’ll listen just how talented he is at baking. But the proof is in the pudding as Giuseppe is actually one of his own main customers.

You won’t often see Tiramisu on sale in his bakery, and that’s because when he makes one he scoffs the lot himself! If you happen to see it for sale, we’d recommend acting fast as we’ve heard – admittedly from the man himself – that this is the best thing since sliced bread.

Was it Rein-ing Rewards for you this Christmas?

Christmas may be over, but there were a few late presents handed out that some […]

Travel to Ancient Egypt with latest game – . Across 15 locked win lines, you […]

This Christmas season, we’re rivalling old Saint Nick in generosity with just how many present [...]